I’ve been looking for a wireless keyboard for my Nexus 7. Not that I’m going to be using it a whole lot, but I want something for client site meetings. So I can be a good boy and get my notes right into Evernote and my tasks right into . Trying to get out of the write-and-transcribe routine.

I was looking at the Logitech, which had good reviews and a nice case, but the vendors on Amazon were sketchy, and it was out of stock at real places. The ZaggKeys also looked good, but the reviews were mixed. The Apple would have been a solid choice, but I didn’t want a bunch of function keys that wouldn’t work. And I kept seeing people saying the same thing: buy the keyboard, not the case it comes with. Good advice.

In the end, I went with the Motorola Wireless. It’s designed for their tablets/phones, but it works fine with the Nexus. Even most of the function keys work, which is nice. I just got it, so we’ll see how long it lasts. So far so good. Paired easily. Uses 2 AA batteries. On-off button to save power. Now I just need to sew a slipcase for it.

Here’s a photo of my Nexus 7 with the Moko case I already had, along with the new keyboard. BTW: It’s a real-sized keyboard. Not too crunched up at all. 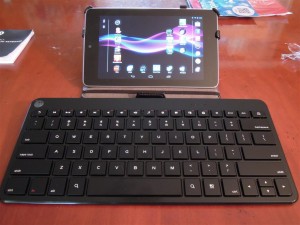 And I know I’m being goofy here, but I kinda like the wacky font they used on the keys.